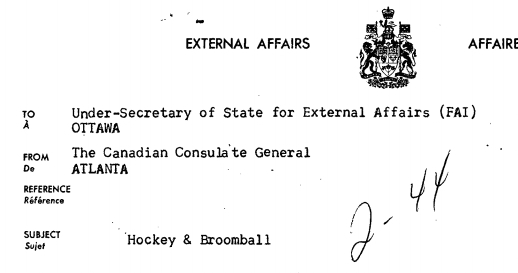 A lot of us kind of shook our heads when the National Hockey League started plopping teams down in the U.S. Sunbelt over the past couple of decades, but you have to believe it did more work studying those markets than it did the first time around. This diplomatic cable, obtained under theÂ Access to Information Act, gives you some idea of the kind of miracle the league was hoping for when it signed off on the Atlanta Flames (R.I.P. 1980).

“This looks like a solid bet Mr. Commissioner, we can confirm there are literally dozens of children who’ve signed up to play hockey. And wait until you hear about theÂ broomball strategy.”

I guess broomball didn’t turn into hockey’s gateway sport, because the league’s second swing at the Atlanta market didn’t go much better. You can watch the former Thrashers playing at their current home rink in Winnipeg.